After the resurrection from the dead by Jesus Christ, He appeared during 40 days to many believers. Jesus Christ could not remain on earth because He had a job to do in Heaven:

The role of Jesus Christ in Heaven is to build the eternal home for the ones who believes in Him. When all houses for all believers are ready, then on the order of His Father, the trumpet will sound and occur the first Return of Christ for the believers into Heaven.

PAY ATTENTION. The time after the resurrection of Jesus Christ and the time of the Apostles is a TRANSITIONAL PHASE. In Old Testament times, the Holy Spirit could NOT make indwelling, because man was a sinner and Jesus had not yet died for the sin of man. Only a temporary fulfilment by the spirit, as with king Saul and David, the prophet Elijah and Elisha were possible, but a permanent indwelling of the Holy Spirit was impossible.
According to the Jews, the Holy Spirit was only for the Jewish people and not for the Gentiles. That is an important fact and then we will see how God had to convince the apostles that the Gospel was and is also intended for non-Jews, including baptism and indwelling of the Holy Spirit. Hence this transitional phase. Things that happen in this transitional phase, we cannot automatically take over and apply for our present time.

Before the ascension of Jesus Christ, the disciples receive the command to wait for the baptism of the Holy Spirit.

Why a baptism of the Holy Spirit, because the Old Testament believer could not receive the indwelling of the Holy Spirit! First, Jesus had to die for the sin of man and overcome death and rise from the dead. First man had to be liberated from his/her sinful nature and be cleansed by the blood of Jesus Christ. This first baptism (=indwelling) of the Holy Spirit would come to pass for the first time at Pentecost. 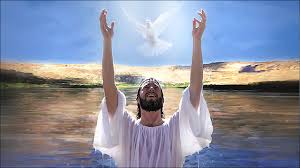 God, the Father, shows here on the first day of Pentecost, by means of that fire settles on the disciples, that He has accepted the work of Jesus Christ, that he accepts and He gives the Holy Spirit to every one who believes in the work of salvation of His Son Jesus Christ.

The work of the Holy Spirit is immediately visible (consider, this is a demonstration in the transitional phase). The prophets Moses, Elijah and Elisha showed their forces (obtained by God) through extraordinary miracles. Here is the power of the Holy Spirit shown by "uneducated (unskilled)" fishermen who speak in different languages. Not in a language of angels, nor a divine language. No, in another language, understandable and comprehensible, to whom who were from abroad (foreign country). Like an unskilled Brazilian, all of a sudden speaks the English language (without any study).

During Pentecost there were Jews present in Jerusalem who had come from Mesopotamia, Judea and Cappadocia, Pontus and Asia, Phrygia and Pamphylia, Egypt and the parts of Libya belonging to Cyrene, Rome, and other countries. Every one of them heard the Gospel spoken in their own language spoken by the disciples by the power of the Holy Spirit!

That is quite a bit different than speaking in tongues! Whereby incomprehensible language is spoken and explanation is required!

The Gospel expanded to the Gentiles

In Acts 10, the Gospel is expanded to the Gentiles. Cornelius, a centurion of Italian descent, is a pious man who worships with his whole house, who gives alms (caring for the poor), well known by the Jews and praying to God (the God of the Jews). Despite all these good works, despite the fact that he was a good person, it was not sufficient for his salvation and to enter into Heaven. He was a sinner who needed salvation through the blood of Jesus Christ.
Peter got a vision and the command of God to eat (for the Jew) unclean animals. Until three times.
Cornelius, commissioned by God, had sent men to Peter. And he has invited his whole family and all of his friends to listen to what Peter has to say. He is not selfish, he let others share in the good news.
In verse 24, Peter came to the conclusion that the good news is ALSO intended for the Gentiles.

In verse 43 is the condition: believing in Jesus Christ for forgiveness of sins. Cornelius, his family and his friends accept this and the result is clear in verses 44-46. At the time of the acceptance and faith in Jesus Christ, the Holy Spirit takes indwelling in the believer. Since this is the second time (first time is the eunuch, an Ethiopian, but with no clear signs of the indwelling of the Holy Spirit) is that Gentiles also belongs to the people of Jesus Christ, this must made clear to Peter. Peter because he is the one on which the rock will be built (Mt 16:19). It is Peter who is surprised (verse 45) that the gift of the Holy Spirit was also given to Gentiles. Verse 46 Peter and his companions heard them speaking in tongues. This speaking in tongues is UNDERSTANDABLE for them, because they heard them magnifying God! This speaking in tongues is UNDERSTANDABLE to them, they heard them magnify God. None incomprehensible language, No! That is quite a bit different than when believers/pastors/elders speak in tongues and no one understands what they are saying.
Verses 47 and 48 are clear. Cornelius and his companions come to faith in Jesus Christ, the Holy Spirit has made indwelling. So the logical consequence is that there should be baptized with water.
Note: So it is not true that the Holy Spirit so takes indwelling after the baptism with water! First it is coming to faith, followed by the immediate indwelling of the Holy Spirit, as in the verses 43 and 44, then follows the baptism with water.

Unlike the letters of the other Apostles, it is only Paul, who writes about speaking in tongues and extensively in 1 Corinthians 14. Here Paul is clear.

So speaking in tongues is initially a speaking to God and NOT what one does in public. Speaking in tongues, without explanation, is like the sound of a flute or harp without distinct in notes.
Ho, ho, but verse 5 and verse 18? That Paul speaks in many tongues, is not surprising. Paul was filled by the Holy Spirit to speak in many foreign languages (all foreign countries he visited, the Gospel proclaimed on the island after shipwreck in the language of that island residents). But ok, here he refers probably to the praise of God speaking in a human-incomprehensible language.
But verse 19 is clear, HE RATHER SPEAKS NOT IN TONGUES WITHIN THE CHURCH. Why? Because it is useless, does not edify and teach. It is useless for the church members. Verses 27-28 is clear. EXPLANATION IS REQUIRED, otherwise one must remain silent. And when there is a prophecy, then that is more important, than speaking in tongues. Just remember that speaking in tongues is the lowest gift of the Holy Spirit.

Research the source of speaking in tongues

Source: Internet Bijbelschool (Dutch) An example of a sister in a church. She got bounded occult after a "prayer woman" had prayed with her in tongues. That happened in a meeting of the non-denominational charismatic "Woman Aglow" women's movement. In that meeting, the sister was deceived by a prophecy that the prayer woman spoke in her lecture. The prayer woman said: "The Lord tells me that there is someone here who is passing through a difficult time, but the Lord tells: I am with you." That is, of course, an open shot for a goal, because in every meeting there are some attendees who are struggling. But the sister from our church, had at that time it very difficult and she thought this "prophecy" was intended for her. Afterwards she searched the speaker. She told about the prophecy and this was meant for her. Also told the woman something of her troubles. The "prayer woman" suggested to pray for her. She agreed. While the prayer woman prayed, she laid her hands on the shoulder of the sister (laying on of hands!!) and after some time she changed into prayer in tongues (without a translation). That same night arose in the house of this sister all sorts of occult phenomena for (sounds, appearances of ghosts, she was even physically harassed by these appearances). Regularly she felt into a terrible fear. She sought the assistance of the leaders of our church. After a preparation in prayer, some brothers visited her. She told that she had confessed to the Lord of the guilt to allow putting the hands on her and letting praying in tongues. The brothers then ordered in the name of Jesus that the powers no longer bother her. The occult phenomena disappeared from then on. What this prayer woman transmitted during speaking in tongues, was not a blessing of the Holy Spirit, but a binding to demons.
A time back, an asylum seeker from Africa told about one of our former elder. He was one of the attendees in a large Pentecostal Church in Rotterdam. This elder spoke in tongues terrible slander in a known to him African language. While the present Christians and the elder thought he spoke in tongues by the Holy Spirit, it was instead terrible slander. End of the source.