The interlude of chapter 12 to 14 end and we continue with the seventh trumpet from Revelation 11 which are the seven plagues out of the seven bowls. These are the final plagues of the wrath of God and with them the end of the Great Tribulation. God is showing that He is in control, He is in control of nature and not the beast. It is Gods last chance to human beings to repent, to say NO to the beast and satan and to give God all honor and glory. 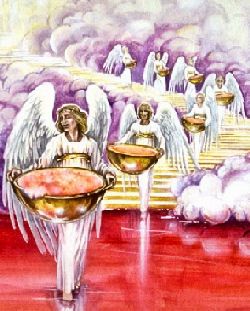 From where come the seven angels with the seven plagues?

The word translate with PORTENT means marvel or wonderful appearance.
The fire in the sea of glass may represent divine judgment that is about to fall on the wicked when the seven angels release the seven plagues. The crowd seen standing before the sea of glass may be martyrs, or they may be survivors of the Tribulation. These crowd members are victors. They refused to worship the beast or his image. And they refused to receive the mark of the beast having his number: 666. So these standing on the sea of glass mingled with fire, they keep living according to will of God as shown through the scriptures. They are “doers of the word” and not hearers only. Despite the torture of the beast, they refuse to bow down and in that way they conquered the beast and satan because they did not give in.
They sing the song of Moses in Exodus 15:1-18 and the song of the Lamb:

"Great and wonderful are thy deeds, O Lord God the Almighty! Just and true are thy ways, O King of the ages! Who shall not fear and glorify thy name, O Lord? For thou alone art holy. All nations shall come and worship thee, for thy judgments have been revealed."

The tent of the witness is the tabernacle which God had shown to Moses (Exodus 25:9).
Verse 6 The seven angels come out of the temple (the temple was a fixed construction of stones). Robed in pure bright linen, and their breasts girded with golden girdles. A pure righteousness without any injustice. Golden is pure, without any impurity. They will pour out Gods righteous judgment upon earth.
The temple is filled with smoke which we encounter in the Old testament, signifying the greatness and power of God.

Revelation 16 - The Dragon, the Beast and the false prophet 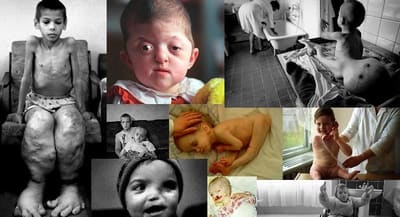 Revelation 16 heralds the end of the Great Tribulation.
The loud voice from the temple must be from God Himself as it comes from the temple. It is His command to the angels to pour out the seven bowls on earth with His wrath.
Here begins the pouring of God's wrath upon mankind and we can easily draw a comparison of God's plagues on Egypt by Moses, when Pharaoh did not wish to release the Israelites from Egypt (see Exodus 7-14). It is the stubbornness of human beings not to pay attention to God's warnings.

The first angel and the first bowl

The first angel pours his bowl on the earth, and foul and evil sores came upon men, who had the sign of the Beast. What kind of sores are they? We can only guess, they could be anything, ulcers, which break out like tumors (Exodus 9:10), cancer, tumors from radiation (atomic bomb, nuclear power stations?). We can presently consider anything, only God knows.

The second angel and the second bowl 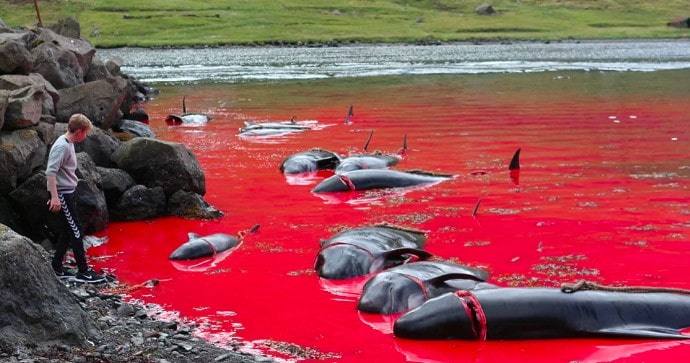 The second angel pours his bowl into the sea and it becomes like blood because all living creatures in the sea are killed. Well mankind is already destroying all life in the sea (pollution, oil drilling, oil disasters, and so on). So it is no surprise that God Almighty is capable of killing all things in the sea causing the blood of the creatures to color the sea red. Or what to think of a nuclear explosion or a big earthquake or volcano eruption in the ocean. We know of the big fractures in the ocean which can cause a huge earthquake. How will it be? God is Almighty, He controls heaven and earth and nature. He has the power in every manner to kill all creatures in sea and oceans including all ships and as result look like blood.

The third angel and the third bowl

The third angel pours his bowl into the rivers and the fountains of water became blood. Again we look back to Moses, who at the command of God hit the water with his rod and all fish died in the Nile and the Nile changed into blood, so that the Nile smelled and the water became undrinkable. In Revelation worldwide the rivers and fountains changed into blood. What a smell over the whole world, all living creature in the oceans, seas, rivers and fountains are all dead. Besides the smell and no drinking water, it reduces too the food supply.
The smell many people has experienced, consider rotting fish at a very warm day, or due to botulism.
In the Great Tribulation that must be a nightmare to man living on earth: smell, smell and again smell. And a terrible thirst since there is no drinkable water. Most definitely no pleasure. Here God makes it very clear, there is only One God Who has all power and controls all. Not man, not satan, but God alone. God alone is Almighty. He controls the earth, not man and also not satan. He is the Creator, He has created all life, fishes, birds, animals, cattle and persons. They belong to Him. And men with their allotted intelligence, ought to glorify God for that, and must worship the Lord God. Should men refuse, than they must accept the consequences of their own actions.

Why is God justice? Because God has warned mankind sufficiently. But man has ignored the warnings delivered by Gods prophets, preachers, evangelists, Internet, and His Word, the Bible. Yes, even worse, man has killed the prophets and preachers. Now God is punishing. Like man punishes a murderer, so God punishes mankind for the murder of His prophets and those who proclaimed God's Word. God judgments are just and true.
The altar cries, meaning all the saints who are below the altar (Rev. 6:9-10).

The fourth angel and the fourth bowl 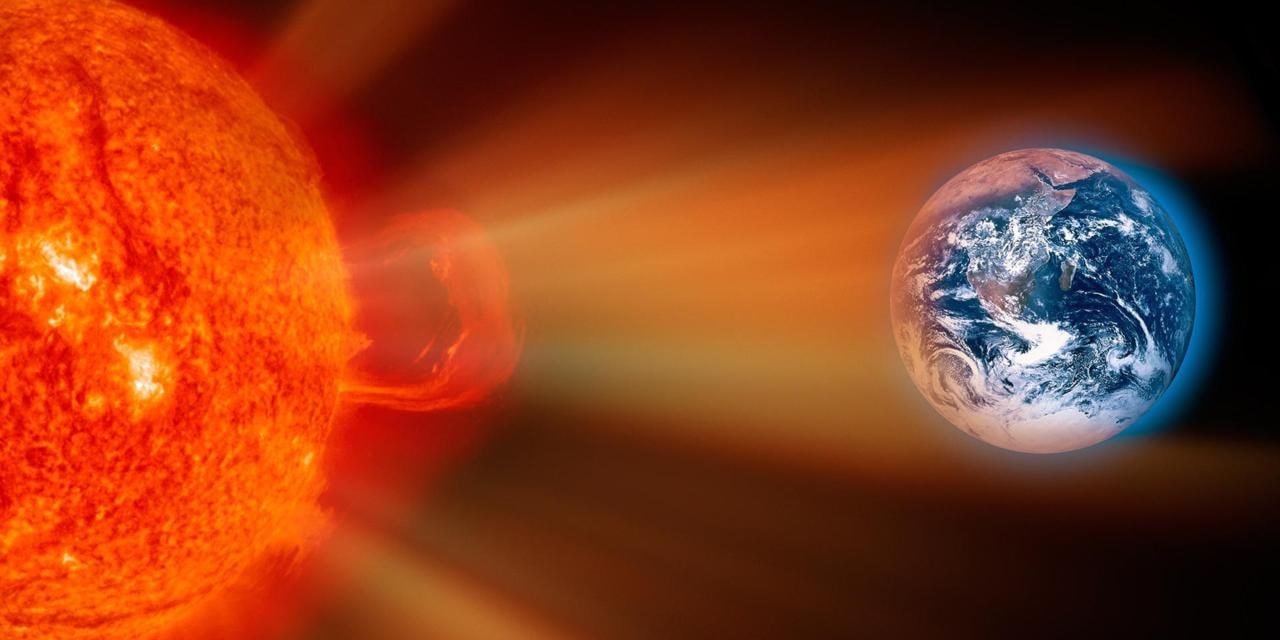 The fourth angel pours his bowl on the sun to scorch men with fierce heat.
Impossible and strange? We did read already, that the closer we get to the time of the end, also knowledge is increasing. How much trouble must the environmentalists take to prevent the destruction of mankind (people lusting for riches and industrialists) and damage of the ozone layer. No ozone layer, that can result in a fierce heat of the sun upon the earth.
The earth had no water so that the forests are dry and possible huge forest fires are the consequences of the enormous heat of the sun. It might also be enormous sun eruptions. Anyway the heat passes through the atmosphere and scorches men with fire.
Despite this warning of God to mankind, mankind does not convert. Just like in Egypt, the Egyptians too and the Pharaoh refused to convert to the Lord God. What foulness. But what about you yourself, have you already converted yourself to God and Christianity? And accepted the Lord Jesus Christ as your personal Savior? Who died for your sins? Or are you still waiting, still postponing your decision, until it is too late and God hardens your heart? Because of the fact that you continued postponing despite God's love and patience, and continued refusing to choose for God's Grace and Love?

The fifth angel and the fifth bowl 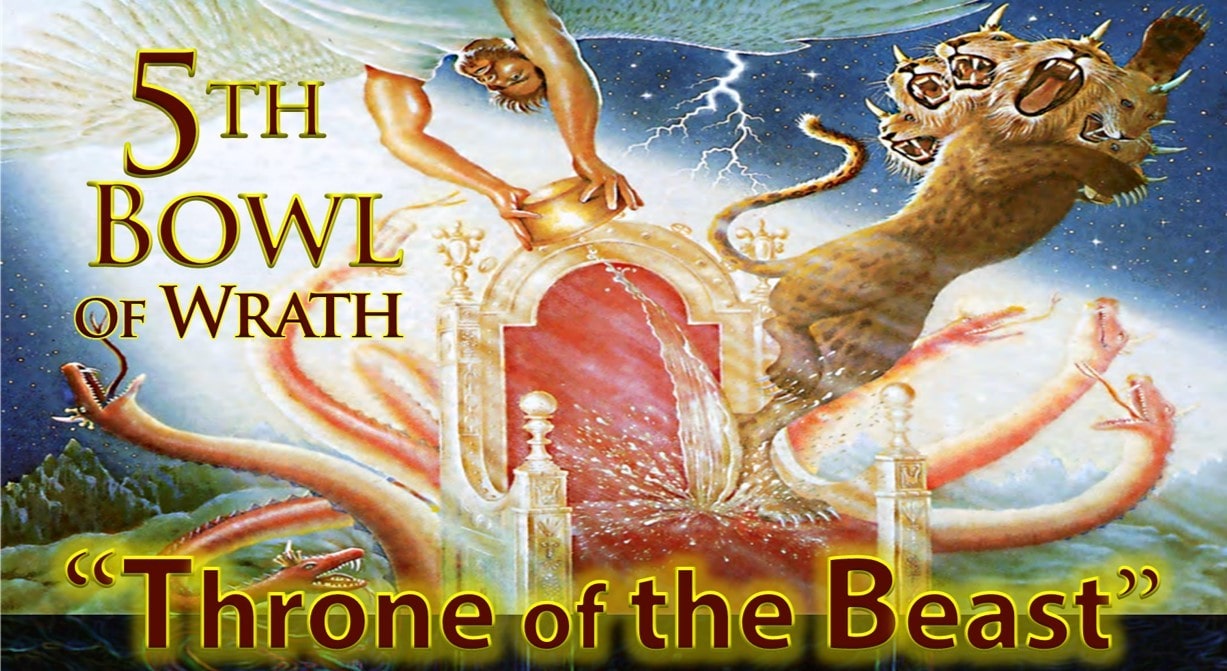 The fifth angel pours his bowl on the beast. Now the beast, satan and his evil angels are punished. Nevertheless they continue to steer up mankind against God.

The sixth angel and the sixth bowl 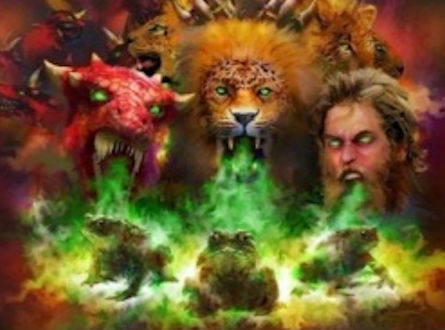 The sixth angel pours his bowl on the river Euphrates. The Lord God prepares and clears the way for the nations to attack the state Israel, by the kings from the east. East of Israel are Syria, Jordan, Iraq and Iran. We all know that presently Iraq is the greatest danger. Anno 2020 God still resists the danger, for the full number of the Gentiles is still not yet complete. Still mankind has the opportunity to convert and accept Jesus Christ as their personal Savior.
The three foul spirits like frogs are the demonic spirits full of blasphemy which come from the dragon, the first beast and the second beast which is called here the false prophet.
They start to assemble the nations of the earth to fight against God and try to end the tortures of God, the Almighty. And the nations are gathered at Armageddon. Armageddon (Hebrew) means the mountain of Megiddo. This raises a problem, because Megiddo is not a mountain (or did it become a mountain due to the earthquake in the Great Tribulation?) but today it is a plain between the Sea of Galilee and the Mediterranean. In the past, great battles occurred here (Judges 5:19, 2 Kings 23:29, 2 Chronicles 35:22). However, here the final battle between God and mankind together with satan will take place. The Lord Jesus Christ will come as a thief in the night to assist His nation Israel and deliver from the hostile man and defeat satan.

And the seventh angel pours his bowl into the air, and a great voice comes out of the (heavenly) temple, from the throne (of Jesus Christ in Heaven) saying "It is done". What is done? Done is that is has became clear that:

Then follows a big earthquake, so big that the great city Babylon splits into three parts (Although generally with the great city, the city Jerusalem is meant, here from the context it is clear that Babylon is meant).
But presently, does exist Babylon? Some explanations are possible:

And every island fled away and no mountains were to found (see also Revelation 6:14). And great hailstones, heavy as a hundred-weight (Babylonian talent) (about 30 kilograms), dropped on men from heaven. Nowadays we see hailstones increasing in size. The largest officially recognized hailstone on record to have been 'captured' in the U.S. was that which fell near Vivian, South Dakota on July 23rd of 2010. It measured 8.0 inch (20cm) in diameter, 18 ½ inch (47 cm) in circumference, and weighed in at 1.9375 pounds (0,88 kg).
God is Almighty. He controls nature. As man we should never forget that fact. Presently it is the period of God's Love and God's Grace in the Lord Jesus Christ to accept forgiveness of our sin. Later it is the time of the end, the time of God's anger and God's wrath. Let us be grateful that the Lord God has revealed the time of the end, in order to warn mankind for that horrible period. Let us be grateful to God, that He still allows us time to make a decision. But we also read that the Lord Jesus Christ comes as a thief in the night (Matthew 24:43-44, 1 Thessalonians 5:2, Revelation 16:15).
Therefore do not postpone your decision any more, for no one knows the hour, Jesus Christ not, only the Father (Matthew 24:36).
Therefore do not postpone your decision if you are still living away from God, MAKE your choice for the Lord Jesus Christ, before IT IS TOO LATE!!!